Community consensus is hard to come by when the subject is a highly-visible planning or development effort.  However well conceived or intentioned, prominent projects may be doomed to failure if consensus is not achieved. Collaborative and inclusionary planning processes that incorporate public involvement throughout the process are more likely to achieve the necessary consensus.  Known as charrettes, forums, or workshops, events are held to bring interest groups together to solve complex design problems in a compressed schedule.  Typically these efforts compress months of planning work into several meetings occurring over a short, focused, time span.  This type of planning process is highly effective due to the level of attention given to a specific problem.

Nelson Engineering has utilized public design charrettes/forums successfully in recent years on several high profile projects.  We have succeeded in involving and winning consensus from the public on projects that have had conflicting objectives, interest groups with competing agendas, and a high degree of complexity.  Those projects include: 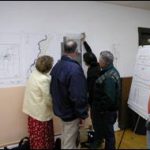 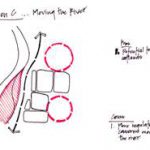 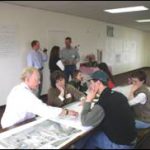 Nelson Engineering led a multi-disciplinary team of four consulting firms for the development of affordable and market-rate housing in downtown Wilson, Wyoming. The team produced two preferred alternatives, one of which was included the Old Wilson School, a local icon that was retained and enhanced in its existing role as a community center.  The preferred alternatives were developed during a two-day public forum that relied heavily on community participation. The resulting alternatives respected the existing community interests in lot layout types, resident profiles, and architecture.

Nelson Engineering led a multi-disciplinary team responsible for preparing a public trails network master plan for the greater Worland, Wyoming area.  The team conducted a three-day public design charrette for the project and prepared a graphics-driven, readily-understood master plan based on the public input received during the charrette.

Nelson Engineering led a multi-disciplinary team of five consulting firms. A community-based, transportation, economic development, and recreational opportunities initiative was developed for the City of Worland and Washakie County, Wyoming.  The project was carried out via a three-day public charrette process that involved a great number of the members of the City of Worland/Washakie County community.

In the late 1990s, Nelson Engineering helped introduce to the community of Jackson, Wyoming, the concept of public design charrettes as a tool for developing conceptual plans to address complex, multi-faceted street infrastructure projects.  The use of public design charrettes was employed by Nelson Engineering on two high profile projects—the East Kelly Avenue Improvements Project and the East Broadway Storm Drainage and Street Improvements Project.