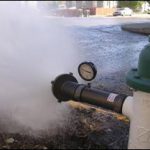 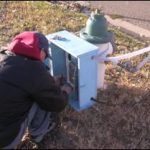 Water network modeling is a tool that enables water system owners and operators to identify existing system deficiencies as well as forecast future system upgrade requirements.  A properly constructed and calibrated model not only assists greatly in achieving optimum system operation but also is an invaluable tool in rationally planning and budgeting for future growth scenarios and least-cost improvement of existing system components.

Perhaps the most critical facet of water system modeling is model calibration. Calibration supplies feedback to the model creator about system conditions that invariably differ from assumed model conditions. Our staff has extensive experience in standard field calibration procedures where stressed system behavior is monitored during hydrant flow tests. After a model has been updated to reflect conditions found in hydrant testing, we take the calibration process one more step by use of field tracer tests. Food grade calcium chloride is injected into traced through the pipe network by numerous strategically-located conductivity meters.  This field-obtained, time-based data is then compared to model run of tracer injections.

The result of the calibration process is a very accurate model in which the both the hydraulic characteristics of the network and the demand characteristics and residence times in tanks and lines reflect the installed system and community demands. Accurate existing system modeling then provides for confidence when modeling infrastructure improvements and expansion.

A valuable outgrowth of a highly calibrated accurate model is water quality modeling. Chlorine residual variation can be predicted throughout a system by the available analysis of the path and residence time of water as is passes through the system. We offer experience in using modeling software to predict system areas where chlorine residual may be lacking or over-chlorination is occurring. This information can be extremely useful in complying with Distribution System Water Quality standards as established by the Environmental Protection Agency.